How to be Wrong About the Same Thing Differently: Doomsday Prophets

Over the course of time, there have been many prophecies of the end of the world, or at least human kind. It is a trend that has lasted thousands of years, and there are two common threads that tie them all together. The first is that the world ends. The second is that they’re all wrong. Here is one list of a mere fifteen failed “doomsday prophecies.” Dating all the way back from around the year 500 A.D., doomsday prophecies have been documented. Even just a simple Google search yields multiple distinct lists of predictions. As is evidenced by our lives, all of them have turned out wrong. There are however, a few important categories that many of these prophecies fall into nicely. 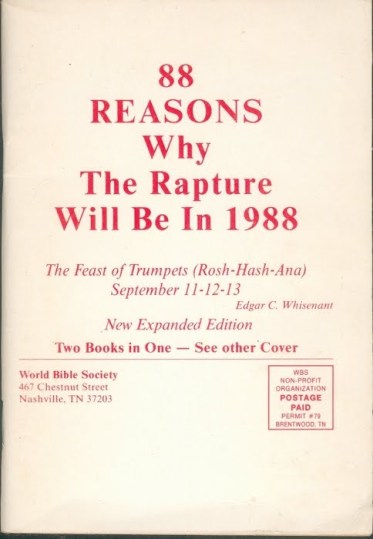 Whisenan'ts book on the end of the world.

The first category is the Biblical apocalypse. There are many people who claim to have pinpointed the date of the apocalypse through careful readings of the Bible. Edgar Whisenant was one such prophet. A former NASA scientist turned doomsday crier, he based his argument on mathematical proofs found from close examination of dates and scripture in the Bible. His prediction called that the world would end precisely between September 11th and 13th, 1988. His book, 88 Reasons Why the Rapture Will Be in 1988, is a detailed list of everything he believes proves the end of the world. It went on to sell over three million copies worldwide. Yet the Rapture failed to come. After this, he proceeded to write three more books, continually postponing the date of the actual Rapture. While it would be inaccurate to speak for all doomsday predictors, the continuation of his theories even after they were wrong may be because of the success of his first. He surely experienced a quite significant material and reputational gain from the sales of his books. Perhaps he may have sacrificed some authenticity of his claims in order to attempt to secure a lasting influx of funds?

The second significant category of end-of-the-world prophecies is natural disaster. Harold Camping is a particularly famous prophet of recent times whose cries fit into this category. It was his belief that the world would end on May 21, 2011. He predicted massive earthquakes that would rock the world, starting at 6:00 p.m. in New Zealand, and from there progressing throughout the world. While this was occurring, true believers would have ascended to heaven to stay at their rightful place with God. The remaining people would be left to live in a ruined world until it finally collapsed in a fiery inferno in October. Similar to Whisenant, Camping also follows a tradition of repetitious failures. He first predicted the end of the world in 1994, a first disappointment to his followers. This recent failure has only increased skepticism of his views, which may seem outlandish. It didn’t appear that way to some though, as Camping and his followers spent over 100 million dollars on advertising the end of the world. The article also states how Camping has predicted the end of the world at least ten times, yet only two were announced publicly (1994 and 2011).

While I believe the end of the world will indeed come someday, I doubt that anyone will be able to accurately predict it from a single source. There are long refutations of Biblical predictions of doomsday theories that are as well grounded in Biblical interpretations as the theories themselves. I believe that extensive physical evidence will need to be provided before I believe in the end of the world, as such a large apocalypse would be extremely difficult unlikely to occur over one or two days.

This entry was posted in Blog #3. 2012 Apocalypse and tagged End of the World, False prophecy. Bookmark the permalink.