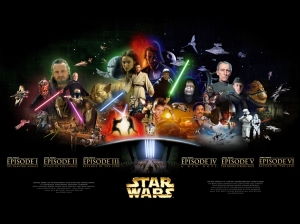 Characters in the Star Wars trilogies.

I first encountered the Star Wars series when I was young, probably around my elementary school years.  I came to be aware of the phenomenon mostly by hearing about it from people around me, and from references in movies and television shows.  Star Wars fever seemed to have infected a lot of the people around me, which I started to notice more towards when I was in middle and high school.  People would reference Star Wars in conversation and, when I mentioned I had never seen the movies, would be completely flabbergasted.  Note to self – never let a Star Wars nerd know the extent of my disinterest in aforementioned subject.  Nevertheless, however unconcerned I might have been about my lack of knowledge on the subject, I will admit that the constant exposure to Star Wars talk eventually piqued my interest and I decided it was high time I saw what the fuss was about.

My first real personal experience with Star Wars happened with the later-created prequel trilogy.  I had seen bits and pieces of some of the original Star Wars movies, but once I concluded that I needed to watch these movies, I figured the most logical move would be to start with would be those that sequentially came first.  I actually found the saga to be quite interesting and enthralling, with an entertaining plot and clever cinematography.  A lot of the aspects were quite ridiculous if I stopped and thought about them, but by accepting the far-fetched notions on which the saga is based I was able to enjoy it for what it was.  Even though I was still far from being a Star Wars fanatic, I can say that I was impressed with the movies and a supporter of them.  However, I must now admit that I have yet to see the original trilogy.  Yes, I know, it’s blasphemy to the Star Wars universe.  But let’s take a step back here and evaluate – living in this modern-day world of high-tech gadgets and incredible CGI graphics, of fast-paced action and flashy explosions, it can’t be much of a surprise that it is easier for my generation it’s generally easier for us to relate to the newer movies.  This clip of Anakin’s pod race exemplifies just that. 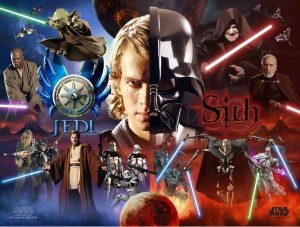 The relentless battle between good (Jedi) and evil (Sith).

On that note, I think that is exactly why Star Wars has continued to thrive for so long.  The creators realized the potential of these films, and they were savvy enough to know that much more success would come if they could change with the times.  The success of the original trilogy came from the fact that it was a completely new idea, something that hadn’t really been seen before.  Sure there had been sci-fi movies made before (movies like Forbidden Planet), but nothing quite like this.  Star Wars had everything – the mystery of space, space travel, inter-galactic civilizations; it had action, romance, suspense, pyrotechnics, power struggles, the battle between good and evil.  Star Wars was a creative masterpiece, one that was successful in blowing the minds of audiences all over the country, and eventually all over the world.  Then it continued to be so successful because of how in-depth the plot was, as well as the ability of the directors and writers to keep giving the audience new and interesting twists in the movies.

Now, if I was a Jedi in the Millennium Falcon along with C3PO, R2D2, Jar Jar Binks, and an Ewok, and I had to get rid of one of them, that would be a mildly difficult choice.  Based on my limited knowledge of the Star Wars universe, I would probably have to ditch Jar Jar Binks.  He seems like a really nice creature with a good heart, but honestly I would not be able to stand his voice for very long.  The convoluted manner in which he speaks would probably get old pretty fast.  Also, I feel like the other three would be more useful.  C3PO and R2D2 are droids, which would mean they are pretty smart and probably very tech-savvy with access to lots of information.  I didn’t know what Ewoks were previous to this, but after some quick research I feel that they would be handy as well, since they were loyal to Luke Sywalker, Leia, and the others and helped fight with them.